So consistent have Dark Tranquillity's albums been throughout the years, that it ironically takes an especially spectacular effort like 2010's We Are the Void to make one realize that the prior few -- specifically 2005's Character and 2007's Fiction -- had actually left something wanting. Yes, both of those releases boasted several standout songs, yet, as a whole, they retroactively seem somewhat unexciting as compared to We Are the Void‘s significant boosting of DT's alchemical interaction between death metal ferocity and melodic sensitivity. For as foreign as the notion of 'hooks' may be to extreme metal's fundamental principles, the fact is that this latest long-player is just dripping with them -- whether they take shape as contagious guitar lines, plaintive synthesizer figures, or even Mikael Stanne's fearsome death growl. Every one of these disparate ingredients -- plus killer riffs and machine-gun drums -- permeate fascinating studies in sonic contrast like 'The Grandest Accusation,' 'At the Point of Ignition,' and an all-time classic in the ominous 'The Fatalist.' Not to be outdone, on 'Dream Oblivion,' DT's concerted attack escalates to an almost symphonic density; on 'Her Silent Language,' rarely heard clean vocals soften the blow accordingly, but just; and on the closing, brooding 'Iridium,' gothic overtones clash against sand-blasting fury worthy of black metal to astounding effect. OK, so stylistically, there are really no revolutionary changes afoot -- not even mild ones, in fact -- just stunningly accomplished songs playing to Dark Tranquillity's strengths on a scale not heard in some time. That's why, before all is said and done, We Are the Void has a very good chance of standing alongside 1995's The Gallery and 2000's Haven as DT career highlights.

Jump to navigationJump to search

We Are the Void is the ninth full-length studio album by Swedish, melodeath band, Dark Tranquillity. It is their first and only album with bassist, Daniel Antonsson who joined in 2008 and left in 2013.

The band began writing for this album in late 2008 (except for the majority of 'Iridium' which was written sometime between 1996-1998 but was left out until this album), all the way up to its recording and is considered to be the second part to their previous album, Fiction, as it continued many of the latter's elements, including the Drop B tuning that was largely present and the clean vocals Mikael Stanne re-introduced on that album.[3]

The band also began to release songs from this album on their MySpace page[4] starting with 'Dream Oblivion' on 21 December 2009, 'At the Point of Ignition' on 14 January 2010 and finally the entire album was available for free streaming on 19 February 2010. 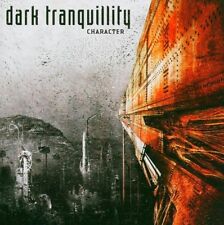 Kyle Ward, of Sputnik Music, described the album like this:

'If you take Fiction, cut out the awesome guitar riffs, increase the keyboard presence tenfold, and then make it more depressed-sounding, you will have exactly what We Are The Void delivers.' [6]

The metalunderground website said that the album is 'Excellent melodic death metal, but it feels like Dark Tranquillity has released the same album three times in a row now.' [7]